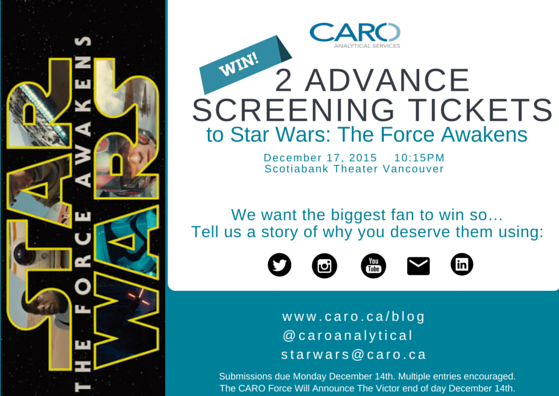 The entries have been pouring in from clients hoping for a chance to win a pair of highly prized Advanced Screening tickets to Star Wars: The Force Awakens on December 17, 2015 in Vancouver. To all those who entered, we would like to say thank you for helping to make the contest a success! Although we applied a sophisticated, statistical process to select a winner, the entries were all so great that we couldn’t pick just one. In true CARO fashion, we have pulled out all the stops, called the director J.J. Abrams and secured additional tickets to the movie so that we could award three winners. Here they are, along with a quick description of why they were chosen:

Our grand prize winner Aaron, boasts longevity in that he has seen every Star Wars movie ever made, in the theater, shortly after release. We have omitted his age, to protect his identity. He is now living vicariously through his own miniature, 6-year-old Darth Vader, who will be a forever-fan (just like his dad!) after attending Thursday night’s premier. Congratulations Aaron!

Our first runner up, Chris, won first place in a Star Wars coloring contest back in 1983 when his father took him to the Return of the Jedi at the local mall. His prize back then? A model Millenium Falcon. Father and son remain huge fans to this day, so huge that his now 76 year old father asked for a drone Millenium Falcon for Christmas this year. We know what you are thinking – “Chris has already won one Star Wars contest!!” Here at CARO we believe that quality is the foundation for success …Obviously! Chris has demonstrated quality penmanship and artistic ability, so congratulations to Chris and his Dad!

Our third lucky winner, Adam, could probably run for Star Wars president (if that were a legitimate occupation), due to his all -encompassing knowledge and passion for the series. He admits to camping out for past releases with his friends, and participating in online debates as to whether Jar Jar Binks is like the dark-side mirror of Yoda (read more, here: https://www.reddit.com/comments/3qvj6w). We are excited to see Adam channel his inner Jar-Jar in full costume, and can’t wait to hear his thoughts on the newest release. Congratulations Adam!

Thanks again to all who entered! If you missed the original contest, you can check it out here.  We will leave you with a final thought we had on this.  It is exciting to think that one of the children who is watching this movie, may be inspired to explore space and their generation will likely be the first people to set foot on another planet, Mars, in the next 15-25 years.  While we love science, but the arts can take us to places long before we can practically do so.